BLINK AND YOU MAY MISS the pint-sized, five-story Versailles condominium building, sandwiched between the Royal St. Andrew and the pencil-thin Echelon that’s now rising on South Gulfstream Avenue across from Sarasota Bay.

But the little building brought big profits to its former owners after Seaward Development partners Patrick DiPinto III and David Hargreaves in December finished the nearly three-year process of buying out all 14 owners. Their plan: a 25-unit, 18-story luxury condo tower still to be named. While they work toward groundbreaking in the summer or fall of 2018, they’re renting out the units.

“What makes this parcel unique is that we have 100 feet of direct waterfront,” says DiPinto. “Many of our neighbors have significantly less. Most of the rooms in our new residences will have big direct water views of Sarasota Bay, Siesta Key, the Gulf of Mexico. The view is one of a kind.”

The location and views persuaded the developers to make offers the owners couldn’t refuse.

Although the price was irresistible, Hicks admits to mixed feelings about the deal. “I really wanted to be there forever,” Hicks says. “I loved my place; I was as happy as could be. It’s kind of heartbreaking.”

While she tries to console herself with her nearly tenfold profit, others are hoping to move in. DiPinto says word of mouth has brought “dozens and dozens of realtors to us with clients that wish to purchase units.” He anticipates floorplans of 3,750 to 5,000 square feet, offered at an average of $1,100 per square foot. 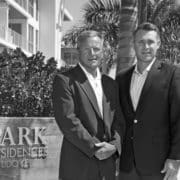