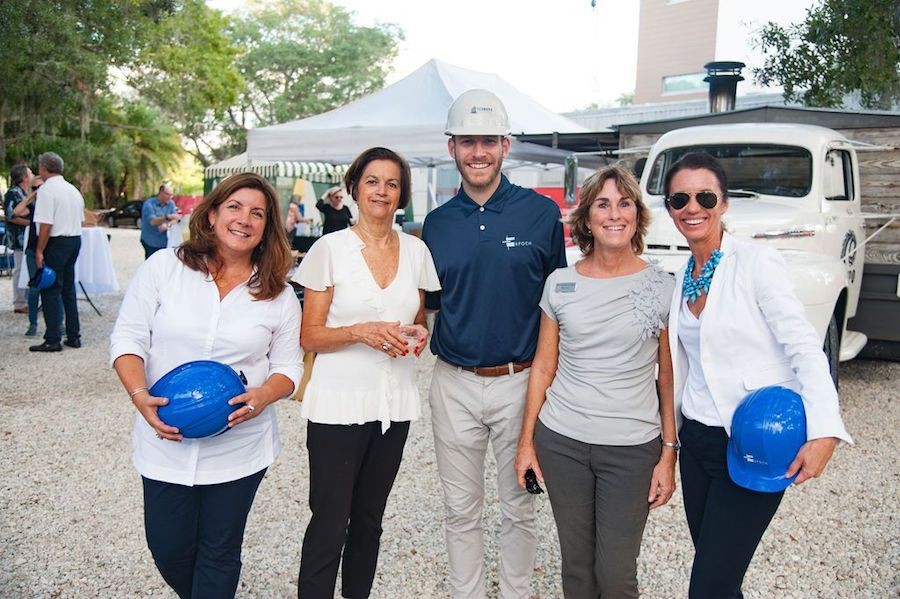 Sarasota based firm, Seaward Development LLC., remains focused on developing boutique communities for homebuyers, including EPOCH, an 18-story condominium community of just 23 residences—currently under construction on Sarasota’s downtown bayfront, between South Palm and Gulfstream Avenues. EPOCH was designed by Nichols Brosch Wurst & Wolfe of Coral Gables and is being built by Gilbane Construction. In October, Florida Gulf Coast real estate agency, Michael Saunders & Company  (MS&C), was appointedthe exclusive listing broker for EPOCH, which is currently under construction. Seaward Development announced the partnership with MS&C for the final 60% of sales, just as the 5th deck was being poured on the new luxury tower.

“Joining forces with MS&C is a natural fit for us,” says Patrick DiPInto, President of Seaward Development. “Both of our firms are locally based, entrenched in luxury waterfront real estate and laser focused on delivering exceptional customer experiences. EPOCH offers an incredible location with unparalleled views of the bay, the highest level of finishes and a focus on personal service. We trust that MS&C will help spread our message around the world.”

Sales and marketing for EPOCH have been overseen by Amy Drake of Property Perspectives Group. Having spent 10 years as Division Director for MS&C New Homes & Condominiums team, Drake mentioned that working with MC&C is “like going home,” she says. “I am thrilled to be back with the best new homes team in the business and to be working again with a visionary like Michael Saunders. The company has the resources and reach like no other and the entire MS&C team speaks the language of our sophisticated buyers.”

Recently, Seaward Development held a private realtor event—hosting over 50 top realtors selling downtown luxury properties for a special Hard Hat Tour of the EPOCH tower while under construction. Gilbane Construction assisted in taking them up in two separate groups to see the bay views from the 4th level deck. “The realtors loved it since they were able to see the construction in action and get a feel for the floor plans,” says Michelle Esposito Young, vice president of operations for Seaward. “I don’t think anyone has ever hosted such an event right in the midst of construction – plus we had Polpo’s pizza truck at the construction trailer, which is always a winner.”

For sales information and appointments visit EPOCHSarasota.com or the Sales Gallery at 53 South Palm Ave. or call Amy Drake at 941-376-9346.

The below article was posted in the Sarasota Observer: https://www.yourobserver.com/article/gulfstream-palm-bayfront-condo-high-rise-versailles

Another high-rise condominium building is in development near Sarasota’s bayfront.

On Tuesday, Seaward Development filed a preliminary application for an 18-story, 25-unit condo at 605 S. Gulfstream Ave. The property is currently home to the Versailles, a mid-rise condo building constructed in 1974.

Seaward Principal Patrick DiPinto said the group has spent more than a year planning to develop the Gulfstream site. Although that planning process is still ongoing, DiPinto said the average unit will be 4,000 square feet with four bedrooms.

At $1,100 per square foot, that puts the price for the average unit at more than $4 million. The units will be targeted at people who want to relocate to the city but don’t want to significantly downsize from a single-family residence.

“We see this site as an alternative for our island and high-end consumers who have large homes and want the convenience of condominium living,” DiPinto said.

Seaward spent more than $9 million to buy out the 14 owners at the Versailles, according to Sarasota County Property Appraiser records. The developer believes sustained demand for luxury condominiums near the water will make that expenditure a worthy investment. DiPinto said his team has already heard from prospective buyers.

“It is truly one of the last of its kind on the bayfront,” DiPinto said. “We’ve got an incredible piece of property that has over 100 feet of direct Florida waterfront views.”

DiPinto said the development would comply with the city’s existing zoning regulations, which means it will go through city staff for review and approval. Seaward hopes to begin construction in the fourth quarter of 2018, which could put completion of the project in late 2020.

Residents on Gulfstream and Palm Avenue have recently expressed concern about the effects of construction in the area — particularly the 624 Palm high-rise condo development, located right next to the Versailles. DiPinto said Seaward has already engaged in conversations with neighboring property owners and city staff, and pledged to prioritize safety during the construction process.

“We’re trying to be cognizant of what’s important to our neighbors,” DiPinto said.

The project does not yet have a name, and sales are set to begin in March. Already, though, the developer is setting lofty expectations for the final product.

“This will be an iconic building,” DiPinto said. “It’s going to be one the city and residents on Palm and Gulfstream are going to be proud of.”